Born and raised on the island of Oahu, self-taught singer/songwriter, Blayne Asing picked up the ukulele and guitar at the age of eight. In addition to playing a variety of instruments, Blayne is a prolific songwriter with a distinctive voice complemented by his own unique country/folk/island style, and charming entertainment style. Na Hoku Hanohano Award-winner Blayne Asing is excited to play with the band and will perform new songs from his upcoming album release.

This performance is free to all subscribers, and only available to others as a pay-per-view purchase. The original live broadcast will be available to view 24 hours after the initial airing. 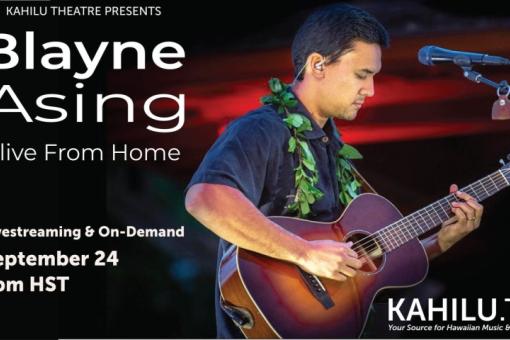 Add to Calendar
Get Directions
Your Home
Your Place (Virtual)
Waimea, HI 96743
Back To Events
Phone Numbers
Contact Info